This mystery place has a sculpture, which is very haunting and we don’t know what it is about. So here is a Eternal Silence:

Eternal Silence, alternatively known as the Dexter Graves Monument or the Statue of Death,[1] is a monument in Chicago’sGraceland Cemetery. It is a bronze sculpture set on and backdropped by black granite. It was created by American sculptor Lorado Taft in 1909.

Eternal Silence is a monument in Graceland Cemetery to Dexter Graves, who led a group of thirteen families who moved to Chicago from Ohio in 1831.[2] He died in 1844, and the monument was commissioned from sculptor Lorado Taft in 1909 by Graves’ son Henry Graves.[3] In Ada Bartlett Taft’s 1946 Lorado Taft; Sculptor and Citizen, it was listed as one of his most important works.[4] Images of Eternal Silence have been used in other artworks, including works by Claes Oldenburg.[4] One folktale claims that if an unsuspecting viewer were to look into the eyes of Eternal Silence’s hooded figure, the viewer would be shown a vision of his or her own death.[1] 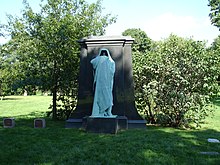 Eternal Silence has been called “eerie”,[3] “somber”,[3] “grim-looking”,[5] “mysterious”,[6] and “haunting”.[6] The bronze figure, based on traditional depictions of the Grim Reaper, is set against a black granite base and stands ten feet tall upon that base.[3] The black granite provides contrast for the bronze statue, which is heavily oxidized because of its age.[3][7] The hooded figure was influenced by Taft’s own “ideas on death and silence”.[4] Historically speaking, the figure in Eternal Silence is related to the sculpted funeral procession around the tomb of Philip the Bold in Dijon, France and the Adams Memorial by Augustus Saint-Gaudens in Washington, D.C.[4] The statue is considered famous and has been noted as Graceland Cemetery’s most “unforgettable” monument.[1][3][7] The monument was designed by Taft and cast by Jules Bercham.[8][9] On its base, Taft inscribed the north side with his signature; the south side is inscribed with Am. Art Bronze Foundry J. Bercham -Chicago-.[3] The monument falls within Art Nouveau style.[4]

Here is something about the sculptor Lorado Taft:

After being homeschooled by his parents, Taft earned his bachelor’s degree (1879) and master’s degree (1880) from the University of Illinois where his father was a professor of geology.[2] The same year he left for Paris to study sculpture, he continued to maintain his connections with the university in Urbana and his sculpture of Alma Mater at Urbana has come to symbolize something significant.[citation needed]

In Paris, Taft attended the École nationale supérieure des Beaux-Arts from 1880 to 1883, where he studied with Augustin Dumont, Jean-Marie Bonnassieux and Jules Thomas. His record there was outstanding; he was cited as “top man” in his studio and twice exhibited at the Salon. Upon returning to the United States in 1886 he settled in Chicago. He taught at the Art Institute of Chicago, a post he was to remain at until 1929. In addition to work in clay and plaster, Taft taught his students marble carving, and had them work on group projects. He also lectured at the University of Chicago and the University of Illinois.[3]

In 1892, while the art community of Chicago was preparing for the World’s Columbian Exposition of 1893, chief architect Daniel Burnham expressed concern to Taft that the sculptural adornments to the buildings might not be finished on time. Taft asked if he could employ some of his female students as assistants (it was not socially accepted for women to work as sculptors at that time) for the Horticultural Building, Burnham responded with the classic reply, “Hire anyone, even white rabbits if they’ll do the work.” From that arose a group of talented women sculptors who were to retain the name “the White Rabbits.” These included Enid Yandell, Carol Brooks MacNeil, Bessie Potter Vonnoh, Janet Scudder, and Julia Bracken. Later another former successful student who emigrated to Canada, Frances Loring, noted that Taft used his students’ talents to further his own career, a not uncommon observation by students regarding their teachers. In general, history has given Taft credit for helping to advance the status of women as sculptors.

In 1898, Taft was a founding member of the Eagle’s Nest Art Colony in the small town of Oregon, Illinois. Taft designed the Columbus Fountain at Union Station in Washington, D.C., in collaboration with Daniel Burnham.

In 1903 Taft published The History of American Sculpture, the first survey of the subject. In some settings, Taft is perhaps better known for his published writings than for his sculpture. The revised 1925 version of this text was to remain the standard reference on this subject until Wayne Craven published “Sculpture in America” in 1968. Taft also wrote Modern Tendencies in Sculpture (1921).

As Taft grew older, his eloquent speaking skills and compelling writing led him, along with Frederick Ruckstull, to the forefront of sculpture’s conservative ranks, where he often served as a spokesperson against the modern and abstract trends which developed in sculpture during his lifetime. Taft’s frequent lecture tours for the Chautauqua also gave him a broad, popular celebrity status in this period.

In 1921, Taft published Modern Tendencies in Sculpture, a compilation of his lectures given at the Art Institute of Chicago. The book continues to be regarded as an excellent survey of American sculpture in the early years of the 20th century; and it offered a distinct perspective on the development of European sculpture at that time.

Taft was a member of the National Academy of Design, the National Institute of Arts and Letters, and the American Academy of Arts and Letters; he headed the National Sculpture Society in the 1920s and served on the Board of Art Advisors of Illinois. He received numerous awards, prizes, and honorary degrees, served on the U.S. Commission of Fine Arts from 1925 to 1929, and was an honorary member of the American Institute of Architects. His papers reside in collections at the Smithsonian Archives of American Art, the University of Illinois, and the Art Institute of Chicago.[4].

Taft was active until the end of his life. The week before he died, he attended the Quincy, Illinois dedication ceremonies for his sculpture celebrating the Lincoln-Douglas debates.[1]

He left unfinished a vast work to be called the “Fountain of Creation” which he planned to place at the opposite end of the Chicago Midway from the “Fountain of Time.”[5] Parts of this work were donated to the University of Illinois at Urbana–Champaign and are now at the library and Foellinger Auditorium. The University named a dormitory and a street in Taft’s honor.[6]

Lorado Taft was a member of the National Sculpture Society and exhibited at both their 1923 and 1929 shows. Today Taft is best remembered for his various fountains.

Following more than a dozen years of work, Taft’s Fountain of Time was unveiled at the west end of Chicago’s Midway Plaisance in 1922. Based on poet Austin Dobson‘s lines – “Time goes, you say? Ah no, Alas, time stays, we go.” – the fountain shows a cloaked figure of time observing the stream of humanity flowing past.

The last major commission that Taft was to complete in his life was two groups for the front entrance to the Louisiana State Capitol Building, dedicated in 1932.

So here you have a nice little mystery place called “Eternal Silence”. Check it out if you live nearby.