Interesting story about a man called Gary Stollman. Is it true or was Gary just mentally unstable? You decide:

Gary Stollman was a man who was targeted and followed by the CIA. He was an extremely intelligent man and a truth seeker. He described his passion to learn as a “holy quest for knowledge”; he wan an open minded individual. Stollman frequently visited conspiracy topics on the Internet about UFOs aliens and other conspiracy topics. He also believed in psychics, the paranormal, and witchcraft; I neither like to use the term magic nor witchcraft because its such a primitive term to explain human potential, such as telepathy, telekinesis, mind healing, Chi, remote viewing, other psychic abilities, activation of the human DNA and mutations. After being harassed by the CIA for several years Back in the ’70s and ’80s he resorted to taking a toy gun to the KNBC news station, where his father had worked, and interrupted a live broadcast by putting the toy gun to the back of a news anchor and demanded he read a script he had written to the public. 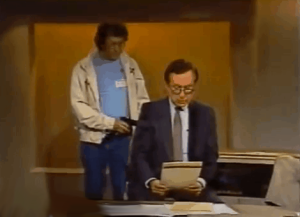 Heres what he wanted the anchor to read:

His physical father is in fact a clone created by the CIA and alien forces.

Cloning is a part of a plot to overthrow the U.S government.

Phones were turned off at Rohlman Psychiatric Hospital in Cincinnati for 48 hours after his arrival.

A former CIA official had an interview on KPFK radio in which he told a college audience that the CIA has towed barges across New York Harbor that were disease-ridden.

The CIA may have created the AIDS virus to wipe out the gay population.

The CIA assassinated John F. Kennedy and the 22 material witnesses who died with two years.

He demands that the Air Force release all information on UFOs.

He demands that the information about Hanger 18 at Wright-Patterson [AFB] be released.

He relates that he spoke to a girl at Florida Junior College who told him that seven of her friends had been “replaced.”

Individuals at the Optimist Boys School in Pasadena were recruited by others and given false IDs and birth certificates.

There is a secret group led by the President’s own staff.

There are beings around with the power to teleport instantly and do the same to others; who can read and control minds, and transform matter into other forms and create it at will.

He asks for a congressional investigation and federal protection.

He states that he cannot harm anyone with an empty BB gun.

This never aired do to the fact that the studio had stopped broadcasting once this had happened. Gary Stollman wanted the public to be aware of an alien plot to overthrow the government. He claimed that his parents were replaced by CIA alien clones and that everywhere he went others were being systematically replaced by the CIA. He also wanted the public to be aware of the fact that John F Kennedy had been assassinated by the CIA. He also concluded the entire phone system in Los Angeles was being monitored by the CIA, of course today we now know the NSA has live access to all our phone calls, texts, and emails; they have been monitoring us long before 9/11.

Gary Stollman had friends in UFO circles and attended conventions. He had conversations with an electronics teacher, at a community college he attended, of conspiracies; his teacher claimed the government had tiny alien bodies in ice at Hangar 18, which was known as the Environmental Control Building. They also spoke of strange things the Air Force had in that building, of it being heavily guarded building in the world. According to Gary, this teacher was later replaced by a clone. While Gary was on his “holy quest for knowledge” he met a man named Rick Shiffman who invited him to his office to introduce him Arpnet, or Advanced Research Project Network, which was sponsored by the Department of Defense. Here Gary gained access to the Pentagons computers and was easily able to decipher the protected files. Shortly after this there was an incident at the building and he was asked by Rick if he had taken anything from the office, he replied that he had not and was told he could not return. While attending one of the many colleges he attended, he was urged repeatedly by a friend, who’s father worked for the CIA, to get off of computers because they do not trust people on computers and they would ruin his life. Gary ignored his warnings and continued to pursue his passion in computers and knowledge. As we can see, Gary’s friend was correct, if you read a document, a compilation of online posts by Gary Stollman, you can understand his story and relate it to what we understand of the Sumarian Tablets, underground CIA Bases, among the most infamous Dulce Base and Area 51, the Reptilian Agenda, and the Annunaki and Zeta Greys. Gary Stollman did not know of these topics, this all occurred during the early stages of the internet, but he had scratched the surface for the rest of us.

Here’s the incident on film: